The pair of tongs sex position is a side entry sex position, where a standing man penetrates his partner who lies in a side plank. It’s thought that it gets its name because the participants’ straight, interlocking legs look like a pair of tongs. It’s known as an extreme sex position for its high degree of difficulty. It should not be confused with the Kama Sutra term of the same name, which is a sexual technique rather than a position. 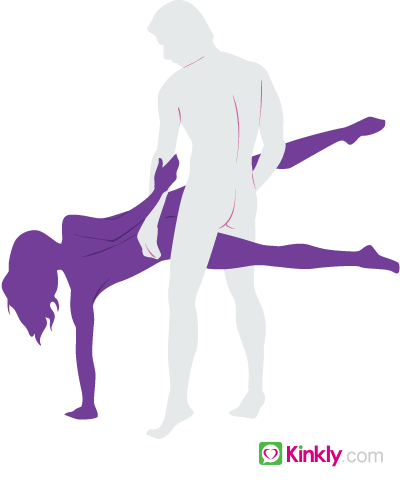 The pair of tongs sex position sees the man in the standing position, with his feet slightly apart. He holds his partner around her waist while she balances herself on one arm in a side plank. He straddles her bottom leg while he holds the other one for additional support. Once in this position, the man can then insert his penis into her vagina.

A variation on the position sees the woman lying on a bed, with half her torso hang over the side. She then reaches down to the floor to steady herself. This alternative provides additional support for the woman’s body. The pair of tongs is difficult for many to accomplish because the woman needs great upper body strength and balance to maintain the position. The man must also be strong enough to support much of his partner’s weight. It carries a risk of muscle strain or injury to the penis, which is not made for side-entry positions. However, the high degree of physical exertion required can be exhilarating for the right couple.